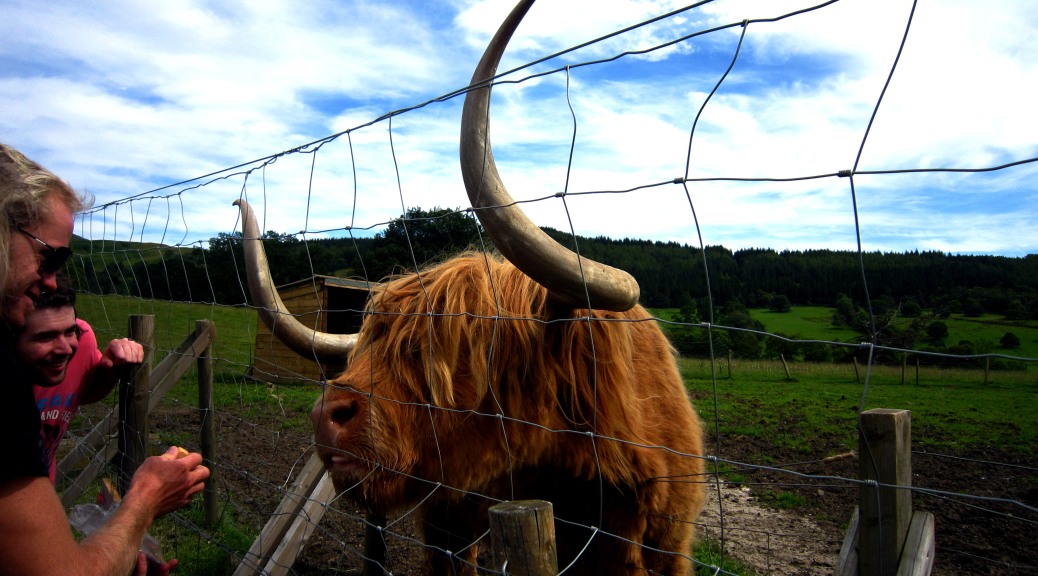 I didn’t think that it was polite to set foot in Scotland and leave without even caring to peek at Loch Ness, so I booked a 3-day Skye-High Haggis Adventures tour to roam around the Highlands. It was a bit daunting though, given that it was the first multi-day tour that I’ll be taking solo.

I never should have worried, because as luck would have it, I had the BEST seatmate that anyone could have in the tour. Stevie B, a Scottish local who literally gave his job the dirty finger before he walked away in search of bliss, sat next to me and had the most interesting stories to give me the lowdown on Scotland. Stevie was actually with the film crew — oh, did I mention that we had an actual film crew following us around for the whole 3 days? The tour company picked our ‘tour clan’ to be the stars in the promotional video they were making. It was a great plus to have these pros around, since they were already taking awesome videos & photos for you. Sweet!

Almost one year ago, I was exploring the islands of Batanes, and I can still remember feeling so blessed to witness nature in one of its most candid and grandest states. They often alluded to Batanes as resembling the Scottish Highlands, and I never thought that one day I can actually vouch for that. They were right — Batanes could have passed off as a bit of Scotland that drifted away and somehow found itself in the East. One big difference, though, was that the mountain ranges here stretched on for miles and miles — and then a few miles more — with massive lochs in between and not a person in sight, save for an occasional pair of hikers who’d rather take on the adventure on foot.

We had a pretty jampacked Day 1. For our first stop, we took a ~10 minute trek up a hill in Stirling to get a close encounter with the commanding Wallace Monument. It wasn’t really hard to miss, even from afar, as it was like an enormous beacon overlooking this city, a place which apparently held strategic importance in the days of Scottish warfare. I guess you had to have a colossal monument for one of Scotland’s most celebrated heroes. If the name ‘Sir William Wallace’ doesn’t ring a bell, maybe the name ‘Mel Gibson’ will. Yes, Braveheart brought Wallace’s story far and wide — if not for several glaring inaccuracies, which everyone probably expects anyway from Hollywood. Perhaps the biggest blooper of all was that Sir William Wallace wasn’t even the real Braveheart; the moniker actually belongs to another Scottish great, Robert the Bruce.

Another interesting stop we had was at the Glencoe mountains, which would have been a bustling ski resort during winter. The view from the chairlift up the mountain was astounding; you can see the gentle bubbling brooks below, as well as a few daredevil bikers whizzing their way down the rocks. While munching away on a picnic lunch on top of Glencoe, we soaked in the view of the far-off mountain ranges as well.

The next stop had a story that I’m afraid was not too sunny, but that didn’t make the ‘Weeping Glen’ any less beautiful. It was apparently the site of the massacre of the MacDonald clan by an army led by a fellow Highlander named Robert Campbell; what we didn’t expect was that in the tour, we had a descendant from the MacDonalds, and another from the Campbells! Fate, how playful you are. (And no, there was no blood shed on this tour. Yet.)

Afterwards, we enjoyed more scenery during the long drive to Loch Ness. We got to see the actual North Face of the legendary Ben Navis (another geeky moment for this TNF fan!). A few more miles and we finally arrived at Morag’s Lodge, which would be our home for 2 days. I couldn’t believe that Loch Ness was just a 5-minute walk away! Morag’s lodge was spacious, spic-and-span, and brimming with honest-to-goodness Scottish hospitality. I don’t think anyone would be immune to its charms. After freshening up, I had my first taste of haggis for dinner. I found myself looking for second servings — haggis actually reminded me of bopis back home (damn it, now I’m craving bopis…).

The great thing about Haggis Tours was that they did not only go through the pains of making sure you had fun on the road during the day; once the tour bus was parked, they also threw parties at the lodge for the tour ‘clans’ to mingle and dance the night away (Scottish-style, of course)! Our tour guide was raving all day about Donald aka ‘the Human iPod’ who was going to play that night at the hostel’s bar; to myself, I was thinking this guy better live up to all the hype. And indeed, this one-man band — armed with his guitar, harmonica & tambourine — was beyond awesome; it was my first time to hear a Scottish guy belt out Redemption Song and get away with it. By the end of the night, he got everyone up their feet by the sheer power of his smooth vocals. The lodge transformed from a quiet nook in Fort Augustus to this throbbing club! Excellent music and a never-ending flow of ciders and ale — it was a good way to end a day well-spent.