Some countries have provinces. We have pockets of paradise.

It’s been a long time since I’ve last explored the island gems of the Philippines, that when I first laid eyes on Coron, I was simply stunned. Stunned speechless, even. Coron was gorgeous beyond words! I’ve felt like I’ve searched far and wide around the globe to come upon something grandiose, and yet one of the most breathtaking places I’ve ever seen was right at home. END_OF_DOCUMENT_TOKEN_TO_BE_REPLACED

Don’t you love it when stars finally align your way? 2013 has been really good to me so far; I’ve garnered a lot of good experiences and memories that I’m sure will last — and we’re barely halfway through the year!

Here’s a vid of one of my favorite escapes so far — Siquijor is simply one of those places that just makes me grow fonder about growing up in a blessed archipelago. Enjoy!

If you’re interested to read the what-how-where’s of our Siquijor adventure, you can check out the all-about-Siquijor post here.

It was hard to believe what was right in front of our eyes — the cascades of crystalline blue-green water had me hypnotized, and we had the waterfalls all to ourselves. I look around and think — friends, we’ve made it to paradise.

Siquijor is a gem of a find, one of the places that really makes me want to know my home country better. It blew my mind thinking how an island as accessible and gorgeous as this one could stay under the radar for so long. As I looked around to see my co-passengers at the ferry from Dumaguete, almost more than half were actually foreigners, aside from the few locals making their way home. And then there were us, a gang of giddy local backpackers — not a usual sighting, I guess. END_OF_DOCUMENT_TOKEN_TO_BE_REPLACED

My heart beats hard against my chest. The guide calls for my niece to cling on to the rope and descend into a dark abyss. I steal a peek over the edge and my eyes bulge at how easy it is to slip and break all arms and feet. My niece makes it all the way down; I draw a breath.

My sister is about to go next. As I see her dangling on the rope, all I can think of is, ‘What have I gotten ourselves into?!’

END_OF_DOCUMENT_TOKEN_TO_BE_REPLACED

I must confess: for each photo you see posted in my web albums, there’s around 10 more photos you’ve been spared from seeing. EVER. The blurred ones, those with colors beyond repair, the countless accidental shots of my thumb, the plain ‘why-the-heck-did-I-take-this-one?!’ photos — yes, all of those were zapped into the virtual limbo of my laptop’s hard disk, erased ala-‘Eternal Sunshine of the Spotless Mind’.

The first photo I ever take on my trips rarely make it to the cut. Usually, it’s a test shot of my bag, or of people hanging around the airport’s boarding gates. Or, more often than not, of giddy travel companions who simply can’t wait to land before taking the first shot. END_OF_DOCUMENT_TOKEN_TO_BE_REPLACED

One day, I’m bound to wake up on the wrong side of the bed and look at life with utter exhaustion and hate.

And then I will watch this video, and everything in the world will seem to be right again.

For more stories, pics and tips about the glorious, idyllic nook that is Batad, you can read about them in my post over here. 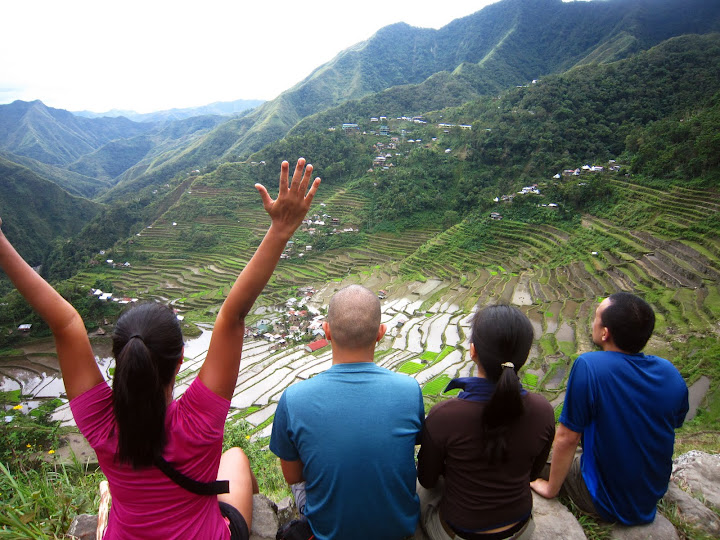 In the end, curiosity got the best of us, and at the third year of a tradition that we unknowingly started, my bundok buddies and I trooped off to Batad to kick off the year with another adventure. END_OF_DOCUMENT_TOKEN_TO_BE_REPLACED

Having been drawn to the island paradise 4 times over the last 5 years, I think I can personally vouch that Cebu is a tried-and-tested fun-in-the-sun destination. Of course, January is a great time to flock to Cebu to join the droves for the Sinulog festival, but Cebu offers a whole lot more: alluring coasts, mouth-watering grub, sky-high thrills, and of course, the people who are gorgeous inside and out.

I rarely get to make vacation mash-ups with my family in it, so this vid was a real treat for me. Now you have solid proof that insanity is hereditary. Enjoy!

I’m known to have bouts of wanting to wander aimlessly anywhere, and more often than not, these are the times when I run into street performers. I adore these chances, as they make me feel that I was on the right place at the right time. At one time, I may think I’m lost, but I may be actually meant to bump into something special.

Here’s a montage of some of the fascinating acts I chanced upon in 2011. Yey to brave hearts and creative minds.

If laughter is the best medicine, then the jocks of RX 93.1‘s The Morning Rush (TMR) are the quack doctors. You have no idea what they’re giving you, but damn it, it just works. END_OF_DOCUMENT_TOKEN_TO_BE_REPLACED

The anticipation is messing with your head. You could have sworn your heart was right next to your ear, as you hear the thumps bang against your eardrums. You glance at your designated spotter squinting at a distance, before swapping Bicolano with the other boatmen. You nervously fidget with your snorkel mask. Wait, did he just say… ‘Jump!’?

And you jump, right into the chilly beryl deep. After a few chaotic seconds of flailing limbs underwater, you compose yourself and catch sight of what you came all this way for: the magnificent leviathan of a fish, nonchalantly passing by in all its 8-metre spotted glory. Everything else fades into the background. You feel that it’s just you, and the giant. It takes all self-control not to reach out and hold on to its fin, ala-Free Willy.

We were blessed with a sunny day in Donsol; all in all, we spotted 4 whale sharks. It’s said that in season, it’s actually rare NOT to see at least one. Some of them glided slowly, letting you bask in its graceful splendor; some of them will really make you work your fins. During the interactions, the guides will remind you to stay at least 5 feet away from the whale sharks, as to not spook them or more importantly, not to get swatted by its tail. At one time, I was gliding along on top of the whale shark, when I noticed the spots getting larger by the second. I soon realized it was trying to surface. In my head, I was going like ‘5 feet! 5 feet!’ at the titan. My friends who dove in with me saw this as well. They swore that given a few more seconds, I could have gotten a free ride on the back of the whale shark. He plunged into the deep again after a while, and once the nervousness wore off, the thought of that rare close encounter still gives me smiles up to this day.

Donsol is one hour away by land from Legazpi City, Philippines. There are a lot of sites offering information on how you can organize your own Donsol whale shark experience; here’s one from the regional tourism site.

Of course, every great trip deserves a tribute video. =)

To say that Mt. Kitanglad was a sight to behold is a glaring understatement. It was definitely one of the best climbs I’ve been on –> fun trail + awesome view = winner! If there was any doubt if climbing is still my first great love, then this trip just about squashes it all.

This goes out to kindred spirits Jan, Stan & Biboy. Can’t wait to go back and visit D2 next! 🙂