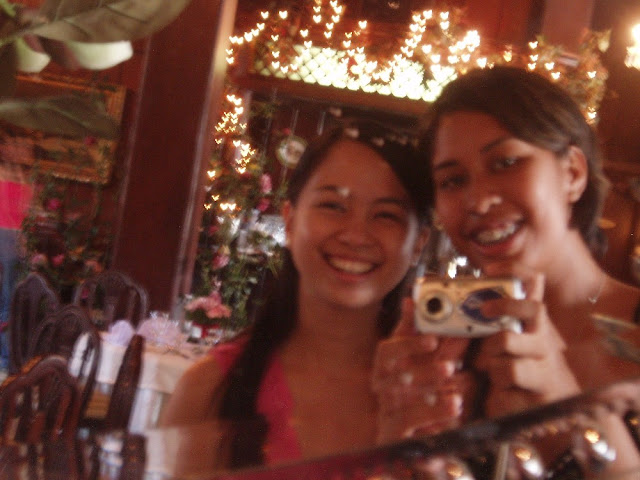 sometimes, the best plan is to not have a plan at all.

i woke up a little bit earlier for a non-work day, since i had to meet tidoy and ke for some wedding-cake-tasting. yes, it’s every bit as delightful as it sounds. this was my first cake-tasting event, and i tried not to appear too giddy as we helped ourselves to the baker’s creations. the baker was a certified chocoholic, so aside from the lemon butter, apple walnut, and other cakes, she also gave us fudge filling, dark chocolate cake and white chocolate bars. my sweet tooth shall not be denied, braced as it may be.

i also got to confirm my level of maturity when we flipped through some wedding cake magazines for ideas. as tidoy and ke were gushing over these classic, elegant cakes, i went gaga over a blue & yellow beach-themed cake, complete with gumpaste shells & starfish and the cartoonish bride and groom with oversized heads. haha, fun. 🙂

as if we hadn’t had enough, the three of us decided to go on a food trip for lunch. after several quips (tagaytay? indian resto? mediterranean?), we decided to invade Old Manila. Our quest to find Hizon’s failed, and we nearly settled for Robinson’s Ermita in desperation. Good thing another option was still open — Intramuros. We set off for the cobbled roads and dropped by Barbara’s, a fancy date-place resto on the second floor on what used to be a gobernadorcillo’s house. In true Bugsy-bakya fashion, we whipped out a cam and went trigger-happy with our photo ops (never mind that any second an ‘orb’ may just appear in the shot. nyay!). good thing we found this resto — the ambiance was perfect, the food was great and the staff were really nice — triple threat!

after our brief romance with Barbara’s pasta, we went exploring and looked around the nearby museum. for the complete turista experience, we entered the Manila Cathedral and were dumbfounded with awe. i mean, i’ve seen stained-glass windows before, but these were something else. not to mention that the Cathedral never fails to dwarf anyone. astig.

it was still too early to call it a day, so tidoy suggested that we check out Cartimar street, which was a strip of ‘Divisoria’ for pet-lovers. ke & i already got attached to a yorkshire terrier, although deep inside i know that that dog (or any dog, for that matter) is better off without me, unless you want to watch how trauma manifests in dogs.

after cooing with birds, dogs, cats, fishes and worms (yes, even worms), the three of us punctuated the trip with a cool halo-halo at Razon’s (haha, umabot pang Buendia.) we also drove by ziggurat and a persian restaurant near jupiter, places that are already in our food-trip hitlist. can’t wait.

yep, today, the kaladkarins conquer Manila. just goes to show how much there is more to discover in the grounds you take for granted, and how you don’t really need to travel far to have fun. in the end, it dawns on you that it wasn’t so much the place as much as the company.

this was probably one of the best Labor Days i’ve ever had in my lifetime. yey. hope you guys had a fun non-work Labor day too. 🙂