Western Australia gave me a warm welcome for my first glimpse of the Land Down Under. So very warm, in fact, that I would soon come to christen Perth in the summer as the city of eternal sunshine (or in Tagalog, ‘ang siyudad na laging tanghaling tapat’).

We easily settled into Underground Backpackers over at Northbridge, our digs for the weekend. The hostel was just a few blocks away from the Perth Central Train Station, so after breakfast (or ‘brekky’, as we were soon to be educated), we trooped off on foot and bought tickets to Fremantle. My friend Geebee and I got a FamilyRider ticket (a day pass that’s a steal for big groups, allowing up to 7 people for one stub!). In a few minutes, we were onboard and watching the picturesque rows of houses zip by on our way to the port city. 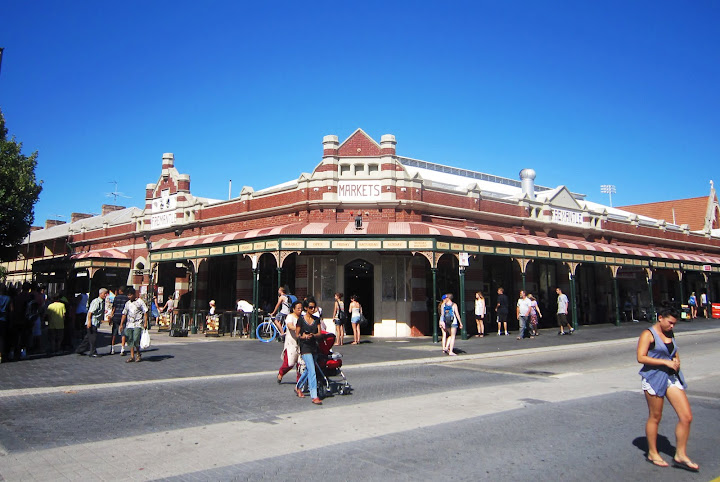 My first impression of Fremantle? Easy, almost tranquil. Imagine a streetscape where it’s always Sunday morning — that’s it. After strolling through a few cafes and boutiques, we found that the bustle was at the Fremantle Markets. Nectarines, peaches, cherries — the sweet scent hanging in the air was bewitching. The reason why we didn’t stuff ourselves silly with the cheeses, pastries and produce was only because of the hearty brekky (see paragraph 2). After combing the stalls of handicrafts, we made our way to one of Fremantle’s stars, the Fremantle Prison.

We made the mistake of wanting to be pretty in our sundresses, so it wasn’t really advisable for us to take the more adventurous prison Tunnels Tour. We signed up for the ‘Doing Time‘ gig instead, which was pretty good for my first time to be shown around a real slammer (the facility only stopped operations last 1991!). The guide threw in a lot of horror and funny anecdotes, stories of riots and escape attempts; all in all, the tour around the pen was educational as much as it was engaging.

We worked up an appetite after all the walking, so we decided to dart for the docks for proper fish and chips at the much-recommended Kaili’s. And it was there where we had Aussie Lesson #2: gulls also appreciate good grub, and are not afraid to take it! We just found it funny that instead of the usual do-not-leave-your-valuables sign, they had a warning against leaving your food out for these cheeky mainstays of the ports. The Little Creatures Brewery was by the docks, too, and judging from the way the joint was packed at lunch, it looks like it’s another fun place to hang out when in Fremantle.

But that wasn’t the discovery of the day: only a few paces from Kaili’s, we stumbled upon an abridged yet no less enticing stretch of beach, with its glistening aquamarine waters so irresistible, especially on this hot summer day, that I swear to God it hurt. Finding ourselves ill-dressed for the occasion again (lesson #3: thou must be always beach-ready when in OZ), we contented ourselves with watching both locals and tourists enjoy the surf, and instead took a pleasantly lazy nap under the shade of a wooden platform. Sun, beach, siesta — yes, I definitely could get used to this.

When the afternoon rolled around, we sauntered a bit more around Fremantle, again stumbling onto another jailhouse. If we still had to deal with old-school cameras, we would have finished a whole roll of film at the Round House‘s well alone.

An abandoned well. Two loony girls. With cameras. Do the math.

We also scored a few souvenirs from the E-Shed markets, cheaper as compared to the ones we found at the Fremantle Markets earlier. Before we knew it, it was time to head back to Perth. After freshening up at the hostel, we hit the streets again to see what Perth has to offer for dinner, and crossed fingers, some nightlife.

Now, we were forewarned by friends that it’ll be tough luck to see any sign of life in Perth once the clock strikes 5 at night, but apparently, we were on a streak, finding ourselves in the right side of town. Northbridge in the evening was crawling with like-minded fellows who were just not ready yet to call it a day. You could pick your poison: chatty banters at the beer garden, party-tunes from the live band at a bar, a classy alfresco dinner — there was even a free open-air movie showing at the Northbridge Piazza!

It was definitely a cool night even just for people-watching. I must say that I’ve been thoroughly convinced that there must be a link between living a laid-back lifestyle and the secret to youth & beauty. It was almost hard to keep up with my head swishing left & right, trying to have a better view of all the GORGEOUS (capital G-O-R-G-E-O-U-S) people around. Come to think of it, if you’re blessed with a stunning beach that’s minutes away from your whims, then what’s not there to beam about? 🙂

So in a day, we’ve been put behind bars, beguiled by fruit and cupcakes, seduced by the beach and quite welcomely surprised by the Perth night scene. Not bad at all for our Australia Ambentyur Day 1!

Things You Can Do For Free!
– See the artworks & free exhibits at the Fremantle Prison
– Saunter around the Fremantle Markets
– Take a dip at Bather’s Bay
– Explore the Round House gaol (a donation is optional)
– Watch an outdoor movie at the Northbridge Piazza