I heard that the Portobello Market at Notting Hill was a mecca for quirky shoppers, so I set off even if the clouds were taunting. Served me right — I got my first dose of the infamous London moody weather. Close friends will know that I’m averse to actually having to open an umbrella; I would rather grin and bear it. On that day, however, I was never so happy that I had an umbrella handy.

The stall-keepers at Portobello Street raised the term ‘rain or shine’ to a whole new level, though. Amidst the free morning shower, they stood their ground, peddling everything from knick-knacks to clothes, from ancient maps to vintage cameras! There was no telling what gem you could find, if you had the patience to rummage through the antique and novelty shops. Surprisingly, I was able to keep my impulses low on this shopping expedition — I only got away with a necklace, a few magnets and a nifty whisky flask.

Deciding to let the rain stall for a bit, I ducked into a quaint cafe. Apparently, the other tourists had the same thing in mind, as the place was packed! There were no tables left, so I took my coffee at the bar and chatted up other tourists who fared the same with the London rain. This is one of the parts I love when venturing off alone; there’s no telling who you’d meet, or what stories and life lessons you’ll walk away with.

After Notting Hill, I headed back to Leicester Square for a West End experience. I decided on watching Priscilla: Queen of the Desert, after reading a few rave reviews for the musical. Of course, no one books a West End ticket in London without first checking if they can get it for half the price online. Evelyn, my hip-scene-savvy London guide, recommended a good site for discounted musical tickets; the last minute tickets were oh-so-worth it! The show was beyond hilarious; I couldn’t help myself from laughing out so hard even if I was solo. You could tell they didn’t hold back on this one, from the glitzy costumes to the flamboyant drag numbers. If ever the cast rolls into your town, I highly recommend you watch it. 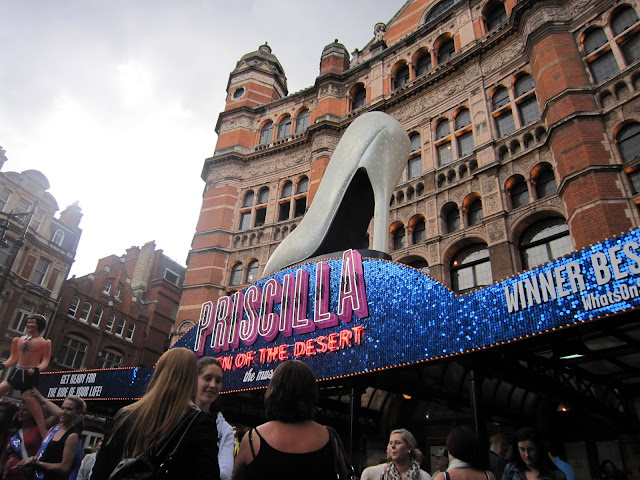 I was on a streak that day — it was time for another ‘P’: once the stars were out, Evelyn and I met up to troop to Piccadilly Circus for another round of clubbing. Needless to say, if you’re up for a wild and brave night, then the London night scene is for you. As to what happened that night, I think I’ll just let your imagination run wild.

Apparently, adventures can still stretch on until dawn, even after you can barely stave off a wink to haul yourself home and call it a day well spent. On my first time to ride the night bus, I was almost halfway back to the apartment when we started to hear raised voices on the top deck. The driver let the bickering go on for a few minutes before deciding that he had it and stopped in front of a police station to let the squabbling people out. And would you believe my luck that on my second time on the night bus, I watched the drama unfold between what seemed to be brothers-in-law; it seemed they had no better place to air their dirty laundry than right smack in the middle of their commute. Oh please, don’t mind letting all of us know about all the emotional baggage you two have pent up inside. Hmm, I guess you should never underestimate the power of the ale and whisky on this part of the world.